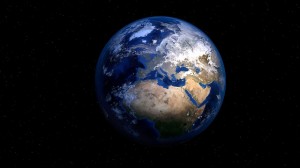 Romans 12:2 says,”Do not be conformed to this world…” Do we really know what this means? Well, I understand it to mean that we should not copy the standards nor the ways of this world in any way. Why? The oldest book that we have says that the world is evil. It is referring to the cosmos, the world system, which is run by and headed by the Prince of this world-Satan.

Christians, born again, Christ-followers are the ones not OF this world. God knew that this world was a great danger to our souls that He sent His Son to deliver us from it. Once saved from this evil cosmos, we no longer belong to it, we belong to a different kingdom-God’s Kingdom. So we are still IN this world (but not OF it) to make a difference by telling others that their soul does not have to be in danger of eternal life in hell. We have the solution-Jesus!

Being IN this world, but not OF this world is as Billy Graham put it: “Christians are like the Gulf Stream, which is IN the ocean and yet not part OF it. This mysterious current defies the mighty Atlantic, ignores its tides, and flows steadily upon its course. Its color is different, being a deeper blue. Its temperature is different, being warmer. Its direction is different, being from the south to north. It is IN the ocean, yet it is not part OF it.” He continues: “So we as Christians are IN the world. We come in contact with the world, and yet we retain our distinctive kingdom character and refuse to let the world press us into its mold.”

Got anything to say? Go ahead and leave a comment!