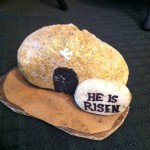 After the death and burial of Jesus (Mk 16:10), the women went out and purchased the embalming spices not for embalming Jesus’ body, but for anointing it as a sign of LOVE, DEVOTION, and RESPECT. It was like bringing flowers to the grave. They questioned each other as to who would be able to move the heavy stone from the entrance of the tomb for them to enter. But as they approached, they saw the stone had been rolled away already.

I believe the angels (as instructed by God, the Father), did not roll away the stone so Jesus could get out, but so others could ENTER IN and END_OF_DOCUMENT_TOKEN_TO_BE_REPLACED

Baby showers are so special and beautiful and so meaningful. From the very beginning, Baby Showers function as a type of initiation into, and a construction of , a new state of being. Baby Showers in their different forms in different eras contribute to the eventual reintegration of a new identity in the community for both the parents as well as the child. Celebrating a child with gifts and provision brings joy to the parents. The initial excitement came to the mother/parents when they learned the news of expecting a new child. This excitement  is beyond this world. Only the heaven’s joy can compare. END_OF_DOCUMENT_TOKEN_TO_BE_REPLACED

Once upon a time there was a young girl that went off to college. Her parents, pastors of very large church, knew she was in God’s hands. They taught her to pray, to fast, to help the needy, to serve , to obey God and share His Word. They raised her to be faithful to God; going to church, working in the ministries, attending all classes, learning more and more about what she could do. Before graduation they received a letter from her. She was in love and she was pouring her entire life into this first love. END_OF_DOCUMENT_TOKEN_TO_BE_REPLACED

3 parts of Understanding     1 unit of Laughter